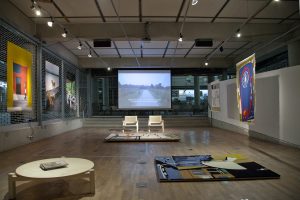 The project Exploring Chandigarh, subtitled « Open to give / open to receive » which is interested in the cultural, architectural and societal project developed in the city of Chandigarh in India, is based on research, documentary, experience, narration and speculation. All these modes of interaction with reality seem to be the means chosen to try to understand the project as utopian as realistic, orchestrated by Le Corbusier and Pierre Jeanneret. Not only this project is based on exploring the strengths of ideologies to be located and embodied in various predefined territories, but also the methods orchestrated by Pierrick Mouton that matters. By linking spaces, actors and temporalities, his practices will try to create a space / time in which people and ideas will meet to understand the city and its challenges to a greater extent. The challenges that will emanate from this abode, will also be the means to question the human, will that under the guise of a better world, build structures forgetting the fragmentation of our realities. M.B