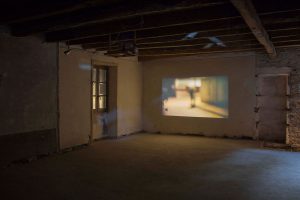 Oro is a divinity of nature, a divinity of the wind, an invisible divinity. In the Yoruba country, Oro is the most influential, the most terrible, and the most powerful deity. During the summer season, and for 15 days, Oro wakes up. At nightfall, draped in a long robe, decorated with shells, a painted wooden mask, the lips tinged with blood; Oro walks through the dark city. The initiated men parade in the dark streets; swirling, dancing, singing, killing stray dogs and chickens. Suddenly, a strange noise roars from the distant forest. This is the signal for all women to lock themselves in their homes: they will not come out. They lie down, cover their heads and those of their children. They have a formal ban to look at the masked figure of the Oro, risking death penalty or sudden amnesia otherwise. A legend says that laymen who venture outside are swallowed by the divinity. Their bodies disappear, only their clothes remain, hanging on the trees the next day. Oro is an ancestral cult still active in southern Benin. It is used for political purposes, to preserve the established order in the community.