God wears no turban
and other strange
messages for the sky 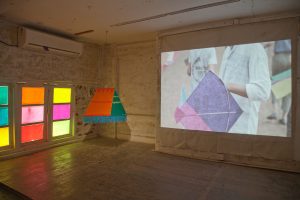 Why do we want kites to fly?
If since several decades, the kites hold an impoverished significance in Europe, it has not always been the case …
Indeed, although it was an object of study for the philosopher Ludwig Wittgenstein, the opportunity of an event for the Bauhaus group in 1920, a sculptural element for the American artist Jacob Hashimoto or a political gesture for the Mexican artist Arturo Hernandez Alcazar, it is
now more often relegated to simple entertainment activities on the great beaches of our old continent where the wind still blows sometimes very strong. It does not have the same signification in India. The kites here are neither quite a toy nor a ritual object. They oscillate between the two and keep the power and the symbolism that the one who creates it and
makes it fly wishes to confer it. There is something similar with the production of an artwork. An artistic production, is about creating an object and then letting it floating on the surface of the world.It is undoubtedly this ideational parallel that guided the artist Pierrick Mouton in residence to Clark House Initiative, to choose the object of the kite which becomes at the same time an artwork, a symbolic object, a vector of meetings and a conceptual gimmick.Pierrick Mouton’s exhibition at Clark House Initiative is a multiple space in itself. A zone of documentation for the workshops he organized to create kites, an area of presentation for them, and a kind
of shop where we can admire the posters he has created in India around this show. And this is the strength of the project proposed by Pierrick Mouton who, by bringing together objects, shapes and techniques that we think we know so well (poster, sculpture, film) he offers the visitor the opportunity to assign the signification that he wants to all of these elements that make up the exhibition.The kite in the practice of Pierrick Mouton becomes a transitional object, as a way to move from one continent to another, from one class, from one caste to another, from one area to another. The kite becomes a reflexive object, forcing us, without a mirror but thanks to pieces of paper assembled, to observe us to re-locate us. And if we have a message to put on the kite, it’s a matter of choice and decide to who we want to address it, because the kite’s web never flies away and we are bound to it, inevitably.


Margaux Bonopera (Curator of the exhibition) 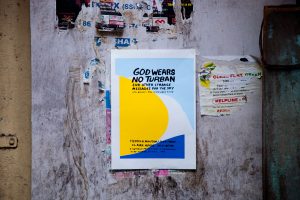