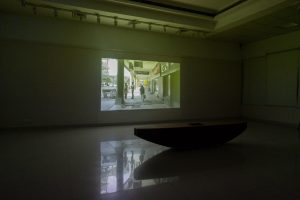 When Le Corbusier designed the layout of Chandigarh he never included Sector 13 as it is considered unlucky in the European regions. Furthermore, every sector of the city and their opposite sectors add up to 13 or its multiples. This superstitions applied to Chandigarh’s master plan, is the starting point of a reflexion on architecture and post-colonialism. The film follow the path of sector 17, a commercial area in the center of Chandigarh. The correspondence between Pierre Jeanneret and Corbuiser embody the film with their private relation.